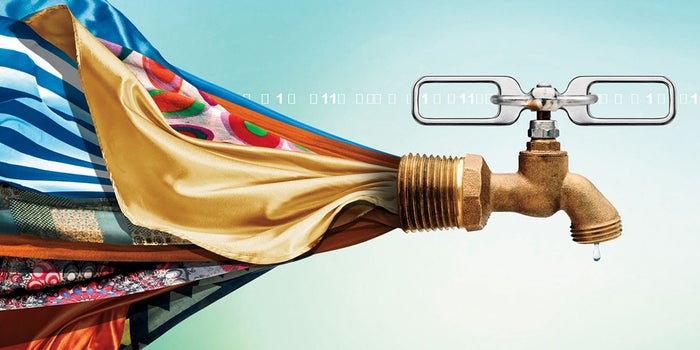 Stephanie Benedetto has always been a material girl — not in the Madonna kind of way, but as a wild child of fabrics. Her great-grandfather came from Austria in 1896 to New York City’s Lower East Side and made coats and boleros out of other immigrants’ furs. Her family has been in textiles ever since. But when Benedetto came of age, she didn’t want to simply carry on. As much as she loved the business, she hated its waste.

The $800 billion global apparel industry, with its ever-faster fashion, has become famous for its squander. It slurps up water like no tomorrow — literally, because at this rate, it will cause extreme scarcity in countries like China and throughout Asia by 2030, according to a report by the Boston Consulting Group. And every year, fashion manufacturing produces 92 million tons of solid waste, most of which goes to landfills or up in smoke. Last year Burberry was called out for burning $37 million of clothes and goods rather than selling them at a discount — a common practice to maintain a brand’s luxury shine. (The company announced in September that it will no longer destroy its inventory.)

And it’s not just clothes. Up and down the industry’s supply chain, there’s excess material coming out at the seams. “I saw a massive problem: factories, mills, retailers, brands sitting on hundreds of billions to literally a trillion dollars’ worth of unused raw material,” Benedetto says.

One day a few years ago, as she sipped on a tall decaf skim no-whip mocha, she became determined to solve the problem. Benedetto, an attorney and now 38, had also been studying the potential of blockchain, the record-keeping technology that fuels everything from Bitcoin to cloud storage. And she realized the technology could be used to upgrade one of the oldest forms of commerce — and make a dent in the garment industry’s waste.

Her idea was this: She’d use blockchain to track the industry’s excess fabric, enabling it to be easily identified and resold. As it turns out, other kinds of startups and policy leaders are exploring similar concepts. “There is exciting potential for blockchain technology to improve our ability to capture the economic value of resources along the supply chain,” says Jahda Swanborough, lead, environmental initiatives, World Economic Forum. “This includes waste.”

Making money from waste is as old as waste itself. It goes back to farmers turning manure into fertilizer, and today it drives companies to use discarded cow fat for jet engine lubricant and turn steel slag into cement. Economists call the concept of turning waste into dollars “by-product synergy,” or BPS. “But it has to have the double whammy of also avoiding an environmental negative impact,” says Deishin Lee, Ph.D., who wrote a seminal paper on BPS while teaching at Harvard Business School. In one example she cited, Dow Chemical Company looked at six manufacturing plants and identified a potential $15 million of annual cost savings, and a reduction of 900,000 million BTU of fuel use and 108 million pounds of CO2 emissions.

In many industries, says Lee, BPS still holds untapped value. But it isn’t always easy to manage. To find waste, you need to track the process that creates it. And blockchain, advocates say, can be a powerful tool for doing just that. “It’s a trust machine,” says Eric Piscini, former blockchain lead at Deloitte and CEO of Citizens Reserve, which is about to launch a novel supply-chain tool using the technology. “And it can track and trace things from their source to the customer.”

A handful of companies have already seen it work. Plastic Bank in Vancouver has been using blockchain since 2018 to reward people in developing countries for recycling plastic garbage, which is then turned into pellets or flakes. The new “ocean-bound social plastic” is sold at a premium to companies like SC Johnson, which is using it to make Windex bottles. “One of our problems is how to get people to trust us when we say this plastic delivered this impact,” says cofounder and CTO Shaun Frankson. “With blockchain, it’s unquestioned.” So far, Frankson says, the company’s programs have kept more than 10 million pounds of plastic out of the ocean, while generating a profit.

Similarly, in Atlanta, a startup called Goodr uses blockchain to get surplus food to charities that feed the hungry. Rolled out last year, the company charges restaurants and other donors for pickup and, in return, helps them unlock new tax deductions by documenting the gifted food through the blockchain tool. According to the company, it’s on track to be in 10 cities by the end of the year and so far has rescued 1.2 million pounds of food.

Benedetto has also seen initial success in taking on textile waste. Last year, following her latte brainstorm breakthrough, she launched a company called Queen of Raw. It’s an online bazaar for leftover fabrics that’s powered by blockchain and AI, and it maps and tracks unused material in factories and warehouses all over the globe. The platform matches the textiles to buyers in the same location, thereby reducing shipping costs and pollution. (The fashion industry has long had “jobbers,” or people who buy this kind of excess and then sell it to designers, but Queen of Raw makes the process far more efficient.) The site also encourages customers to make Pinterest-like vision boards, which prompts recommendations for new fabric rescues hot off the factory floors. Queen of Raw takes a commission on every sale.

But that’s the simple part of Benedetto’s plan. After winning a WeWork Creator Award for $360,000 in January, she fast-tracked a second blockchain tool. It’s called Materia MX.

When a brand buys a monthly subscription to Materia MX, it’ll get a customized supply-chain management system that’s designed to expose excess yardage and waste (water, chemicals, dollars) as they occur in real time. “Let’s say I am the farmer,” Benedetto offers. “I get an alert on my phone and enter ‘I just took 500 pounds of raw cotton to X mill to get spun into thread.’ I upload a certification that it’s 100 percent organic, click, and save.” The mill operator does the same when he receives the cotton, and up through the chain. The idea is that the brand can see why its waste is happening — for example, a mill throwing out material because of a designer making changes too late, according to Timo Rissanen, Ph.D., assistant professor of fashion design and sustainability at Parsons School of Design. Materia’s data can then help the company become more efficient going forward — and be rewarded financially for taking action. As soon as the brand gets an alert of surplus fabric, even finished clothes, it can sell the excess immediately on Queen of Raw, without racking up storage fees. Everyone wins — Benedetto, twice.

How hard will it be to get companies and suppliers to share sensitive data? That’s a significant challenge for blockchain and BPS, says Piscini. But he and Benedetto believe that with time (and perhaps incentives), that can be overcome. “We have already saved close to 1 billion gallons of water, and we’ve saved businesses well over $10 million in just a few months,” says Benedetto, who now has a team of 10 and predicts she’s close to making a profit. If her grand vision comes true and big brands stop wasting material, what happens to her business? “Are you kidding?” says Benedetto. “That means everyone will be on our software solution. We’ll help solve the water crisis. It’ll be sweet.”